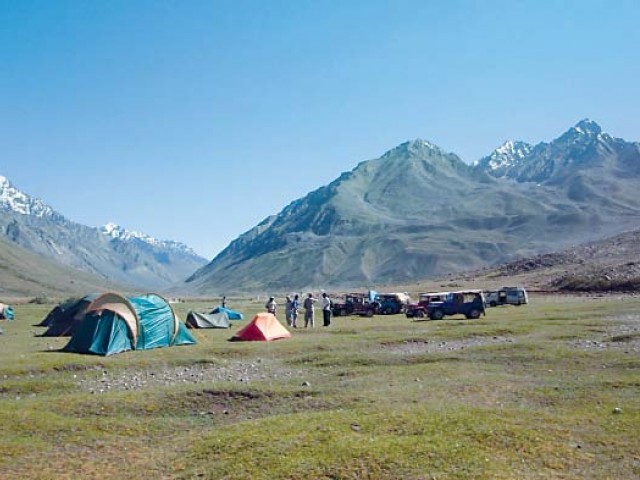 SWAT: With hotels and guest houses filled to capacity, the camping pods and tent villages set up by the Khyber-Pakhtunkhwa Tourism Corporation(TCKP) have proved to be a boon to manage the nearly two million tourists who visited Hazara and Malakand divisions during week-long vacations of Eidul Fitr.

The camping pods set up at some scenic spots have been accommodating as many as two to four people. It has been a similar case with the tent villages where scores of tourists who could not find space in the resorts, have taken up accommodation.

The pods and tent villages had been set up by the Khyber-Pakhtunkhwa (K-P) government as Bishigram in Swat, Sharan in Kaghan near Mansehra, Thandiani in Abbottabad, Yakh Tangai in Shangla and Sheikh Badin in Lakki Marwat at affordable prices.

The pods had been renovated by the TCKP ahead of Eidul Fitr to facilitate foreign and domestic tourists during the summer season, TCKP Director General Junaid Khan told The Express Tribune on Sunday.

He added that the idea of setting up camping pods at remote, scenic spots has proven to be highly successful as it provided accommodation facilitates to thousands of tourist families at low prices compared to private hotels.

He maintained that camping pods and tent villages at tourist spots were a continuation of the process initiated by the TCKP to facilitate tourists and promote tourism.

Moreover, he said that the lush green valleys, waterfalls, snow-covered mountains peaks, rivers, and the natural beauty of the province were also proving to be a draw for international tourists as well as adventure lovers.

Apart from accommodation and sanitation facilities, Junaid said that the K-P government had also provided other facilities such as parking lots and play areas for kids.

He noted that during the Eid holidays, they had opened the partially-built 81-kilometre Swat Expressway which helped cut the travel time between Islamabad and the scenic valley to just two and a half hours.

In the Malakand division, Junaid said that Kalam was the main centre of attraction for tourists due to its cool weather, adding that domestically, people from as far as Azad Jammu and Kashmir, Punjab, Sindh, Gilgit-Baltistan and other plain areas of K-P were seen visiting and enjoying themselves.

“I belong to Peshawar and came here along with my friends to enjoy Eid vacations due to its cool weather,” said 22-year-old Paras Khan, who was visiting Kalam.

The weather of Kalam is very pleasant and tourists can come here to enjoy its natural waterfalls, lakes and snow-covered peaks in a safe atmosphere, he maintained.

Malam Jabba, the country’s lone ski resort, also attracted a large number of tourists with their families who enjoyed the chair-lift ride.

“I came to Malam Jabba after visiting the Kalam valley to beat the heat,” said Sajid Khan, a resident of Nowshera.

“I enjoyed a ride at chairlift at Malam Jabba as it was very comfortable and safe. Tourists must come here to enjoy the natural beauty of the area,” he said.

However, he complained about the high prices being charged by private hotels, restaurants and shopkeepers which need to be checked by the district administration, he said.

“Private hotels are charging Rs6,000 to Rs10,000 for a room per night from families in Kalam,” he complained, demanding strong action against profiteers.

He added that the significant improvement in the law and order situation has immensely contributed to the massive surge in domestic tourism in K-P while the TCKP rest houses, private tour operators, hotels, motels and guest houses have received record booking orders from domestic tourists on Eid.

A group of Turkish tourists, who visited the Kumrat valley in Upper Dir, have lauded the natural beauty of the area, the hospitality of locals and the arrangements made by the government.

A statement issued by Malakand Regional Police Office suggested that around 145,000 tourist vehicles have entered Swat, 30,000 in Lower and Upper Dir, 11,000 in Chitral, 8,000 in Shangla and 3,000 in Buner districts to visit scenic and beautiful places of Malakand Division.

WITH ADDITIONAL INPUT FROM DNA