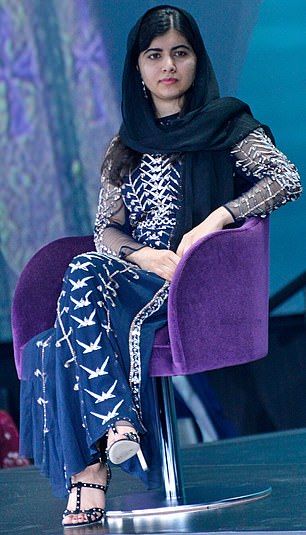 The world’s youngest Nobel laureate and a modern-day symbol of courage, the Pakistani activist Malala Yousafzai has come a long way since she was shot in the head by the Taliban for daring to argue that girls should go to school.

Which made it all the more incongruous to see her in the company of plutocrats at a glitzy ceremony in Florida earlier this month, naming a new $1 billion cruise liner.

Out of respect for her Muslim religion, she was asked to perform the ceremony with an 18-litre custom-made bottle of mineral water instead of the usual giant bottle of champagne.

As she named the Celebrity Edge by signing a tablet computer and blessing the 2,908-passenger ship ‘and all those who sail upon her’, she was flanked by beaming cruise industry bosses.

They might well be pleased. Royal Caribbean, owner of the Celebrity line, is the second-biggest player in a multi-billion-pound industry, and getting a global celebrity with as spotless a reputation as Malala ‘on board’ was quite a coup.

Sure enough, she was paraded in front of a 3,000-strong audience at Port Everglades in Florida.

The hosts, Celebrity’s president Lisa Lutoff-Perlo and her boss Richard Fain, chairman and chief executive of Royal Caribbean, rhapsodised about their partnership with their guest’s charity, the Malala Fund.

Founded in 2013, it seeks to ensure a dozen years of free, safe and decent education for every girl.

It was, boasted Mr Fain, such a ‘natural fit, as we share the same passion and commitment to an incredible cause’.

Malala later dutifully posted online a picture from the event to her 1.4 million Twitter followers, thanking the cruise industry bigwigs for their ‘warm welcome, commitment to gender equality and generous investment in girls’ education’.

You would have to have spent the past six years on a cruise ship not to know Malala’s profoundly moving and inspiring story. In 2012, she was 15 when a Taliban assassin shot her in the head as she was returning from school on a bus. 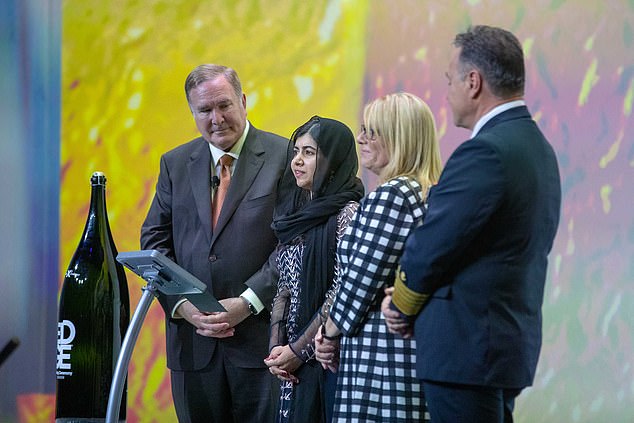 She had earned the Muslim fanatics’ enmity by writing a blog for the BBC from the age of 11, in which she stood up to the extremists by advocating education for girls.

She miraculously survived and, after the bullet was removed at the Queen Elizabeth Hospital in Birmingham — where she had been flown for treatment — she attracted an outpouring of international support.

German broadcaster Deutsche Welle dubbed her ‘the most famous teenager in the world’.

Now 21, she is an undergraduate at Oxford University but continues to campaign through her fund to bring schooling to 120 million girls in the world who go without it.

She is clearly an enormous inspiration to many. Only this week, pupils, parents and teachers at a Texas school voted to rename it after her.

However, her readiness to give a frankly rather tacky plug to a cruise company is likely to have revived concerns, first raised some years ago, that she and her commendable mission could be hijacked by more powerful outside interests.

Of course, charities must balance the importance of preserving their good name with the necessity to raise money — and hers is certainly a vital issue.

But as corporate giants rush to associate themselves with good causes amid growing public interest in whether they behave ethically, some fear Malala and her fund risk damaging their ‘brand’ with unwise commercial partnerships.

They have all rushed to open their wallets, or offer help or support — earning a handy association with the charity and its beloved figurehead.

Perhaps it’s no great surprise that Malala, the girl from a Pakistani village, is now firmly enmeshed in the corporate world. Her rise to fame was managed by two powerful multinationals — Edelman, the world’s biggest PR company, and McKinsey, the world’s biggest management consultancy firm.

The connections started when a young McKinsey staff member, Shiza Shahid, became friends with Malala and her family after reading her BBC blog.

After Malala was shot and moved to Birmingham, an early visitor was former prime minister Gordon Brown, a UN global education special envoy.

Understandably overwhelmed by the interest in them, the Yousafzai family asked Mr Brown to persuade McKinsey to lend them Ms Shahid to help them cope.

Together, the family and Ms Shahid devised the idea of setting up a fund, with the McKinsey consultant becoming its initial head.

The fund received crucial advice from a senior McKinsey executive, Lynn Taliento. Of the charity’s current nine-strong board (which includes Malala and her father, who came to live in Britain along with her family), three are McKinsey alumni, including the chairman, Susan McCaw.

McKinsey, a U.S. company with a reputation for having a hard-headed obsession with its bottom line, may not be everyone’s idea of a nurturing guide to an idealist like Malala. 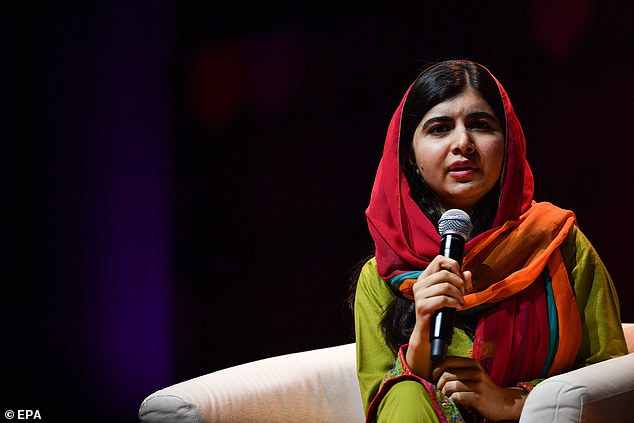 The hosts, Celebrity’s president Lisa Lutoff-Perlo and  Richard Fain, rhapsodised about their partnership with their guest’s charity, the Malala Fund

The firm is reeling from a New York Times investigation that claimed it helped to raise the stature of authoritarian and corrupt governments across the world, including in China, Russia and Saudi Arabia — sometimes to the detriment of Western interests. McKinsey has called the report ‘misleading’.

Edelman, a specialist in PR ‘crisis control’ and ‘reputation management’, has also come in for occasional criticism over how far it will go to polish the image of beleaguered clients.

And it had to apologise after two internet blogs written by supposedly independent ‘average Americans’ extolling the virtues of the Walmart retail chain turned out to have been paid for by the PR agency to promote its client.

Edelman, a U.S. company, didn’t respond to questions this week on its relationship with the Malala Fund or the precise number of its clients that are involved with it.

Starbucks is a major client of McKinsey and a partner of the fund. Microsoft is another client and the company’s founder, Bill Gates, has given $4 million (£3.2 million) to the fund through his philanthropic foundation.

The fund declined to say exactly how much it has received from its various corporate partners.

When Malala shot to fame, the British artist Jonathan Yeo, who painted her portrait for the National Portrait Gallery, admitted he had reservations about the publicity machine that was engulfing her.

‘There are people circling around her who are looking to, perhaps, piggyback on the goodwill around her and the purity of her cause,’ he said in 2013. ‘People looking to promote their own causes or simply launder their reputations.’

Mr Yeo told me this week he had really been thinking of politicians, but some might say his remarks fit well with the big-business interests keen to be associated with her.

Mark Borkowski, a London PR expert, said companies were ‘ticking a box’ by getting involved with Malala just as the public is becoming more concerned about corporate social responsibility.

‘In a world looking for easy messages, these big companies look good standing next to someone with her reputation,’ he said. ‘It’s virtue signalling.’

He puts Malala’s decision to link up with a cruise ship company down to naivety and inexperience. ‘She’s probably very busy and it’s very difficult to step back and see what your next move may be.’

History doesn’t suggest the Malala Fund’s corporate partners share her idealism and strong ethical values quite as sincerely as they claim.

Starbucks has been appointed a Malala Fund ‘envoy’, and last year announced it was giving $100,000 to the fund’s fight for secondary education for girls in the developing world — a project in which the fund seeks to invest $10 million a year.

Founded in 2013, the Malala Fund seeks to ensure a dozen years of free, safe and decent education for every girl

To mark International Women’s Day in March, Starbucks had Malala choose a playlist of songs by female performers that were played in its outlets across North America.

A gift of $100,000 is pretty small beer for a company that recently announced takings of $6.3 billion in just three months. And Starbucks is one of several Malala Fund backers that have a dismal record for tax avoidance.

In 2012, it emerged that the company had paid just £8.6 million corporation tax in Britain in more than 14 years.

Its European business has recently managed to pay an effective UK tax rate of just 2.8 per cent (when the UK corporate tax rate is 19.5 per cent).

Starbucks has also been criticised for years for unscrupulous business practices against smaller rivals.

While it no longer uses child labour, as it did in Guatemala in the Nineties, it is still accused of short-changing poor coffee farmers and chronically underpaying its cafe baristas.

The company, which sets great store by its ‘environmental stewardship’, has also been criticised for wasting water, and for its dismal record on recycling.

This year it sent 175,000 workers on ‘racial bias education’ after two black customers were controversially thrown out of a Philadelphia Starbucks branch. In short, it could do with a bit of Malala magic.

The tech giant Apple, meanwhile — the Malala Fund’s first ‘Laureate’ partner, its highest rank of supporter — is another mega-corporation that has frequently failed to live up to its benign and ethical marketing of itself.

In January, Apple chief executive Tim Cook joined Malala on a trip to Lebanon, where they were photographed meeting female Syrian students — all of it flagged up on Apple’s website.

The same thing happened in July when she visited an Apple technology education project in Brazil. When Apple announced that it will help the Malala Fund expand by providing help with computer equipment and research, Malala commented: ‘My dream is for every girl to choose her own future.’

They certainly wouldn’t choose a future in a Chinese Apple factory. A report this year described appalling conditions in which workers stand for up to ten hours a day in hot, deafening workshops making iPhone casings.

It claimed workers had to handle noxious chemicals, sometimes without masks or gloves.

Off duty, they return to cramped, rubbish-strewn dormitories with no showers or hot water. Many go without washing for days at a time, workers told the financial news service Bloomberg.

Apple is also notorious for avoiding paying billions in taxes by basing itself in low-tax Ireland and accumulating huge cash reserves — revealed last year to be a jaw-dropping £198 billion — ‘offshore’ so it can avoid paying taxes.

Vodafone is another Malala Fund backer with an image that could do with sprucing up. This year the consumer group Which? named it the UK’s worst mobile phone provider for the seventh year running.

Two years ago, it paid out £4.6 million over ‘serious and sustained’ breaches of consumer protection rules, including taking pay-as-you-go customers’ money without providing a service in return (the company insists the report wasn’t fair).

It has been accused of tax avoidance in the UK, Switzerland and India. In 2010 and 2011, protesters picketed Vodafone shops across Britain after it was revealed that HM Revenue & Customs allowed it to avoid paying vast amounts of tax on profits racked up by a subsidiary based in a tax haven.

None of which is designed to be critical of Malala herself. This remarkable young woman has long acquitted herself with a courage and moral authority far beyond her years.

What a shame it would be if the noble ideals she promotes were to be sullied by the corporate behemoths that have hitched their wagons to her star.