The Pakistani campaigner for universal access to education imparted advice on finding courage in the face of death.

“I was not thinking about courage, I was thinking about my rights,” Malala Yousafzai said before a sold-out crowd of 8000 people in Sydney’s International Convention Centre.

Malala rose to fame when she survived an assassination attempt by the Taliban at the age of 15 in 2012. She was returning home, riding on the school bus from school in Pakistan’s northeast district of Swat Valley when it happened.

But her decision to become an activist came four years earlier when she agreed to write a blog under a pseudonym for the BBC’s Urdu service about life under the Taliban’s ban on girls’ education.

‘Silence was not an option’

“For me, it was speaking the truth and raising my voice for my right for education,” she said. “Remaining silent was giving up and losing my future.”

“I thought they may target me, but otherwise I will live in this situation forever.”

She urged Australian students who may be feeling overwhelmed by current events to not let their age be a barrier to creating social change.

“I started speaking up when I was 11. You can change the world – whatever your age, background, religion. 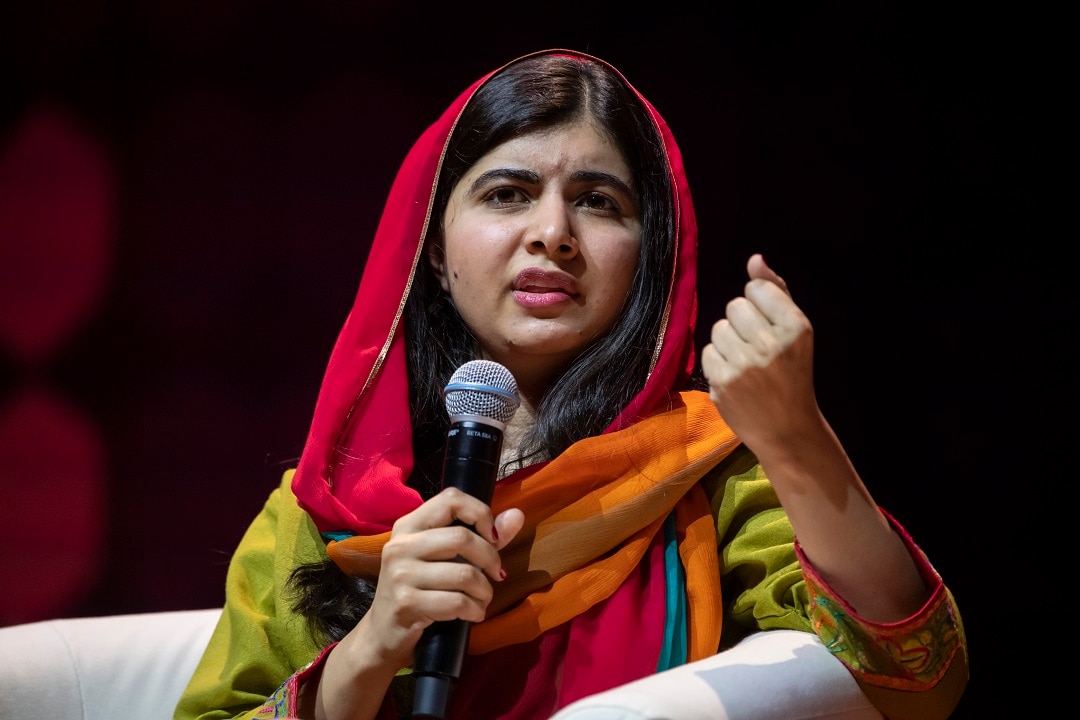 Malala credited her father, who was in the Sydney audience, with endowing her with the self-belief and courage to change the world.

“Girls [in Swat Valley] soon after they turned 13, 14 – they were not allowed to have their own voice. They were stopped [from speaking].

“My story was different because my dad allowed me to speak – he did not stop me. The only different thing is my dad believed in me and in me having a voice.”

At the age of 17, she became the youngest Nobel Peace Prize winner for her work highlighting “the struggle against the suppression of children and young people and for the right of all children to education.”

In her 2014 acceptance speech, she said she did not see herself as particularly special.

“As far as I know, I am just a committed and even stubborn person who wants to see every child getting a quality education, who wants to see women having equal rights and who wants peace in every corner of the world.”

About US$50,000 from the Nobel prize-winning money was donated to rebuilding a school in Gaza.

She said her mission to ensure all girls go to school continues today.

“I stand up for 130 million girls who have no education because I was one of them,” she said.

She said it was not until her life hung in the balance that she realised the true power of speaking up.

“The terrorists, in order to silence me, they did a death attempt – and they failed. That was a sign of how strong my voice and activism can be. They saw that as a threat.”

The left side of her skull took the impact of the gunshot fired by the Taliban and she underwent surgery to remove the bullet in Pakistan, before being airlifted to the UK to receive the care of specialist neurosurgeons.

A legacy of the attack is the Cochlear implant she wears on her left ear. Asked by a student in a pre-recorded message how to navigate and overcome having a disability, Ms Yousafzai said she reframes what the physical impairment means to her.

“Whatever physical weakness I have that is part of me and that should not stop me from doing anything in life,” she said.

“If you do not consider it a weakness, I think that is the first step of overcoming it.” Life as a student

Dealing with violent threats and her celebrity status became more difficult in the UK, but her life continued as a student at Oxford University.

Studying philosophy, politics and economics, the 21-year-old is now in her second year and has moved out of home.

She said the hardest part of the transition has been doing the laundry.

“My parents say I don’t miss you as much as you miss me,” she said with a smile.

“When it comes to laundry – that is the only time I go home.”

Ms Yousafzai’s speech comes as the world marks the 70th anniversary of the Universal Declaration of Human Rights.

Asked about her thoughts on the #MeToo movement, Malala praised its impact on raising issues of discrimination in Western nations.

“It is raising awareness of the violence and harassment that women are facing,” she said.

“In the West, it has never been mentioned in this way before. In that way, it is a positive thing because we are talking about it.”

“I hope that this will raise awareness that this is a global issue and highlight the discrimination women, ethnic minorities, different groups are facing.”

She said work must continue on the ground in developed and developing nations.

“Under-representation, inequalities are global. In Australia, the US, the UK, women are discriminated against in one way or another. Unequal pay. We are 50 per cent of the population. But when you look at (parliament) it (the female representation) is 16 per cent. Come on, we have to change that.”

After returning to her native Swat Valley in Pakistan’s northeast, Ms Yousafzai said she is keen to return again once she completes her studies.

Visiting her hometown in March, she said the experience was emotional.

“As soon as I put my feet on the ground, I could breathe the air, I was so grateful, so happy. 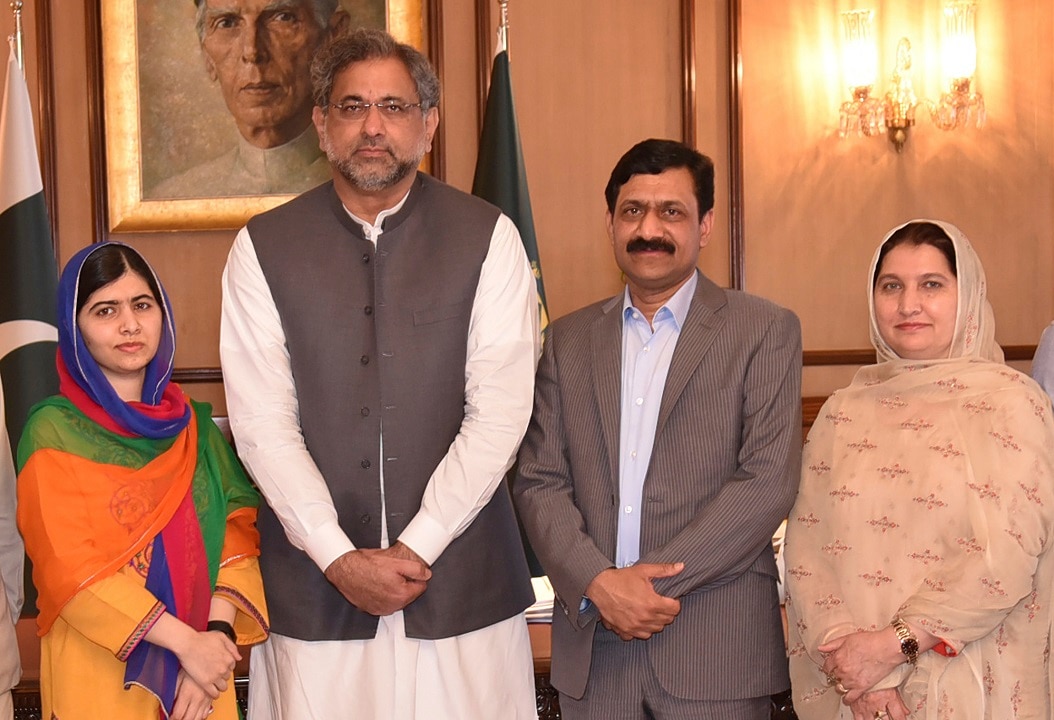 Malala Yousafzai and her parents pose for a photograph with Shahid Khaqan Abbasi, Prime Minister of Pakistan in Islamabad, Pakistan.

During the trip, she met with feminists in the country, Prime Minister Shahid Khaqan Abbasi, and also delivered a televised speech.

She said at the time she was proud and honoured to return home to see the impact of the $6 million-plus invested in girls’ education in Pakistan.

A future politician or Pakistani PM?

Probed on any political aspirations, Ms Yousafzai said she is disheartened by the state of politics.

“It is quite discouraging,” she said, adding that she viewed a political career with “decreasing attractiveness”.

And what about being Pakistan’s second female prime minister after Benazir Bhutto?

“I hope that there is more females than me (for the job),” she replied.

She did admit to not having thought too far beyond graduating, but was open to the possibility of a job in Australia.

“I don’t know career wise. If there is a job in Australia I can do… I do love cricket though.”

Appreciating the value of education

Asked in a pre-recorded question from a student on how best to explain the value of education to someone who does not see it, Ms Yousafzai admitted that having to fight for the right did create a greater sense of appreciation.

“It is given to them. They do not go through the stage of fighting for it,” she said.

While only in the country for two days so far, Ms Yousafzai said the place has already won over her heart.

“I already love the country. I’ve come from the UK, the cold and rain. And I’m happy to enjoy the weather here. Secondly, I am a big fan of the Australian cricket team.”

Today, there are 262 million – one out of every five children – children under the age of 17 out of school, according to UN statistics. Students of the school of Nobel Peace Prize winner Malala Yousafzai flash victory sign in her hometown of Swat Valley in Pakistan.

Ms Yousafzai continues speaking around the world to promote women’s rights through the Malala Fund. The non-profit organisation works in Pakistan, Africa and the Middle East.

Ms Yousafzai will also speak at the Melbourne Convention and Exhibition Centre on Tuesday as part of the Women World Changers series. Organised by the Growth Faculty, Malala’s speaking engagements follows speeches by Hillary Clinton, Valerie Jarrett and Elizabeth Broderick.

From Malala to Parkland, why are the victims demonised? | Nesrine Malik | Opinion

Malala Yousafzai on the importance of technology, education, and … magic